Gallery of Restored Locks and Dams

Each of the 70 foot long drum gates had a radius of 21 feet, and required UT testing and steel repairs, as well as abrasive blasting and painting.

Abrasive blasting and painting of the complete exteriors and partial interiors of the three gates was conducted. SSPC Class 1A containments were erected. SSPC-SP 10 Near White Metal Blast with recyclable steel grit was the abrasive blast cleaning method used. The paint system spray-applied to the exterior steel surfaces of the gates was Tnemec Coatings Pota-Pox Plus epoxy. The interiors were coated with Tnemec-Tar coal tar epoxy.

To repair the four operated slide gates, they were first removed. New bronze seals were machined and installed to replace the worn-out seals on the gates and imbeds. The cast-iron slide gates were also blasted and painted with an epoxy coating. The gates were then replaced and retrofitted with new electric motor operated actuators.

The project was completed on schedule.

Underwater diving work was required for the setting of the new bulkhead gates. Divers cleaned the sill and ensured the bulkhead gates fit in the slots and properly sealed prior to de-watering the outlet channel. A 30 ton rough terrain crane was used to set the newly fabricated bulkhead gates.

The project had a very strict construction schedule. The Lovewell Reservoir was lowered below the spillway gate sill elevation to allow complete un-watered access to the upstream side of the spillway gates. The work was required to be completed during a shutdown period from September 15th and December 15th. 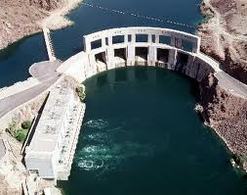 In 2002 Abhe & Svoboda, Inc. performed rehabilitating work to the Parker Dam. The 320 foot high dam is not the tallest dam in the world, but is considered to be the "deepest" because 235 feet of the structure is below the riverbed. The massive reservoir created by Parker Dam, Lake Havasu, holds 210 billion gallons of water. Located on the Arizona/California border, Lake Havasu is the water source for both the Central Arizona Project Aqueduct and the Colorado River Aqueduct, which supply the water for Phoenix, Tucson, and practically every city in the greater Los Angeles - San Diego area.

This project involved abrasive blasting and painting of five 50 foot x 50 foot regulating lift gates. Abhe & Svoboda, Inc. operated a large floating bulkhead to de-water each regulating gate bay. SSPC Class 1A containments were erected utilizing a BEECHE platform under each gate and Etobicoke® system scaffolding up and down stream of each gate. The abrasive blast cleaning method used to prepare the steel surfaces was SSPC-SP 10, Near White Metal Blast with recyclable steel grit abrasive. Amerlock 400 and Amercoat 450 HS by Ameron Coatings was spray applied to all steel surfaces of the gates.

There were 27 contract modifications on this project, yet the work was completed 6 months ahead of schedule and without any injuries. 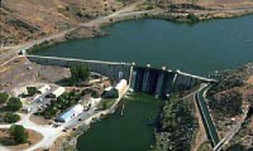 After the gate steel surfaces were abrasive blasted, the gates were inspected for proper surface preparation. During this inspection a major problem was encountered with the drum gate bronze aluminum hinge pins. Several 3" diameter hinge pins were broken. A change order was issued to remove and replace all of the 17 broken hinge pins. Special hardware removal procedures and expedited pin fabrication were required to completed the project on schedule.

The project had a very strict construction schedule. The work was performed during a shut down period from October through March. The reservoir was lowered to allow work on the drum gates in an un-watered state. All of the work was required to be completed before March when the shut down period was over and spring runoff water from the mountains raised the reservoir water level. The project was completed in early March, almost a full month ahead of schedule. 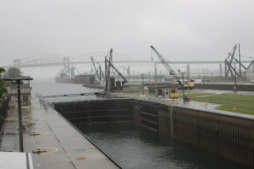 In 1999 Abhe & Svoboda, Inc. performed rehabilitating work to the MacArthur Locks - a system of channels, canals, and waterways make the Great Lakes accessible to the Atlantic Ocean, and every year hundreds of millions of tons of cargo are transported through the Great Lakes region.

Between Lake Superior and Lake Huron is a series of locks known as the Sault Locks. The Sault Locks, which include MacArthur Lock, are the busiest in the world, despite the lakes being frozen and closed to shipping for three months each winter. During winter months the locks are drained and maintenance is performed during an annual shutdown period from December 15th - March 15th. In the winter of 1998/1999 Abhe & Svoboda, Inc. performed major renovations on MacArthur Lock.

The MacArthur lock is 800 feet long, 80 feet wide and 30 feet deep, and large enough to handle ocean going vessels. The project involved extensive concrete repairs to the south wall and vertical monolith joints. The concrete repairs consisted of saw cutting around the perimeter of the marked repair areas, chipping out the concrete to a depth of 12 inches, preparing the  substrate surface, and forming and pouring the repair areas with a fiber reinforced acrylic polymer modified concrete. Following concrete repairs, the monolith joints were injected with hydrophobic polyurethane resin foam grout, and sealed with an elastomeric joint sealant.

About 85% of the work was completed during the winter shut down period of December 15th - March 15th. The remaining work, which involved blasting and painting the tainter valve gates, was performed without interfering with river traffic. The remaining blasting and painting operations took place inside the tainter valve gate chambers within the confined spaces of the lock monolith walls.

Despite the major change orders the MacArthur Locks renovation project was finished ahead of schedule and without any injuries.