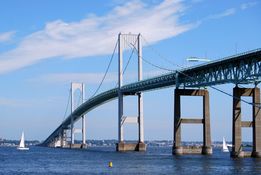 Scope: Repair, clean and recoat  one million square feet of structural steel surfaces on the famed Newport Pell Bridge, featured on the back of the Rhode Island state quarter.

The $41,363,310 contract was awarded by the Rhode Island Turnpike and Bridge Authority.

The 11,248-foot-long, 48-foot-wide suspension bridge, which opened in 1969, connects the cities of Newport and Jamestown over the Narragansett Bay. About 27,000 vehicles cross the bridge daily. The bridge is the only toll road in Rhode Island, with a $4-per-car toll in each direction.

The project included abrasive blast-cleaning and recoating the steel with a NEPCOAT-approved system. The existing coatings contained lead; containment was required. A third-party NACE/SSPC-certified inspection firm oversaw the coatings work, which  was about two-thirds of the contract’s total value.

In 2013, Abhe & Svoboda, Inc. completed its contract of abrasive blasting and painting the Newport-Pell Bridge.

Oregon has more than 200 historic bridges. Over the years, Abhe & Svoboda, Inc. has worked on the restoration and rehabilitation of many of these including several of the landmark bridges in Portland such as the Broadway, Hawthorne, St. John's, and Ross Island bridges. 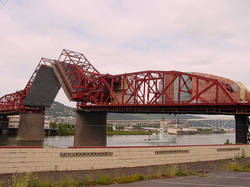 Abhe & Svoboda, Inc. blasted and painted approximately 622,000 square feet of the Broadway Bridge’s failing paint system, including the steel of the entire below deck structural components and the above deck structural components of the bascule span. Abrasive blasting with recyclable steel grit was used to clean the steel surfaces. SSPC Class 1A containment systems were used during lead abatement and painting procedures. A Wasser High Tech Coatings moisture-cure polyurethane paint system was applied to all steel surfaces.

The entire underside of the bridge was rigged for access and containments by utilizing a SAFESPAN® platform system and Etobicoke® System Scaffolding. The above deck structure was also rigged with Etobicoke® System Scaffolding. The movable bascule span required unique rigging, which included special span-balancing and Abhe & Svoboda, Inc. designed containments. All scaffolding and containments were designed and attached to the bridge to allow the bascule leaves to remain fully operational, thus allowing boat traffic to pass under the bridge unhindered. 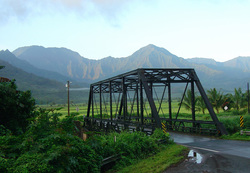 The north shore of Kauai is considered one of the most beautiful places in Hawaii. The area is characterized by tranquil valleys with green taro fields, dense tropical forests, countless waterfalls, and the majestic and rugged cliffs of the famous Na’Pali coast. The pristine landscape is home to some of the most isolated and sacred places in Hawaii and is believed to be among the first areas settled by the ancient Hawaiians.
The 110 foot long Hanalei Bridge, originally built in 1912, is one of only two bridges in Hawaii registered as a National Historic Landmark. The one-lane Hanalei Bridge, is the only roadway connection for remote north shore communities to the rest of the island. Local residents feel the Hanalei Bridge protects the area from over-development and tourism, by preventing large construction trucks, heavy equipment, and tour buses from entering the area.

Starting in the 1970’s, several plans to widen the bridge were put forth, but local community members repeatedly opposed the plans due to the fear of losing their rural lifestyle. For decades, transportation planners and community members were unable to reach a compromise. Meanwhile, the Hanalei Bridge sat in disrepair and severely deteriorated to the point that large pieces of steel were falling off of the truss onto the road deck.

In 2001, Abhe & Svoboda, Inc. began renovation work on the Hanalei Bridge. The entire steel truss superstructure was dismantled, as well as the wooden plank road deck. The one lane bridge is the only crossing over the Hanalei River, therefore critical operations were scheduled to minimize bridge closures. Abhe & Svoboda, Inc. worked with the Department of Transportation to keep community members and motorists informed of upcoming closure schedules via a telephone hotline.
​
A new truss made of high strength steel members was erected in place of the old superstructure, and painted with a high tech protective coating system. The new truss was designed to resemble the original bridge to preserve the look of the valley. The bridge was painted the original color, and the manufacturer’s plaque from 1912 was mounted on the new truss to commemorate the original structure.

Portland, Oregon is home to several historical and unique bridges. Built in 1910, the Hawthorne Bridge is the oldest bridge in Portland and it is also the oldest vertical-lift bridge in the United States. Two - one hundred and sixty-five foot tall towers on either side of the lift span house 450-ton counterweights, which are used to raise/lower the lift span. The tall towers also make the Hawthorne Bridge a recognizable feature of Portland’s landscape.

In 1998, Abhe & Svoboda, Inc. was awarded a contract to undertake a major renovation of the bridge, which included coatings work, sidewalk widening, concrete pier widening and post-tensioning, and structural repairs and upgrades, and mechanical rehabilitation of the lift span.

The bridge is a six span overhead truss bridge. The fifth span is a vertical lift span, capable of a vertical movement of 110 feet, which provides a lateral waterway clearance of 230 feet. Two 165  foot tall towers on each side of the span house the counter weights used to lift the span.

Abhe & Svoboda, Inc. removed all of the lead-based paint from the above and below deck steel structure as well as the concrete counterweights. Abrasive blasting with recyclable steel grit was used to clean the steel surfaces. SSPC Class 1A containment systems were used during lead abatement and painting procedures, including a specially-designed movable containment system. A Wasser High Tech Coatings moisture-cure polyurethane paint system was applied to all steel surfaces.

Abhe & Svoboda, Inc. also performed significant structural repairs and upgrades. The existing bridge deck was removed from all six spans and replaced with a new galvanized steel grate bridge deck. Steel braces supporting the counterweight towers and the counterweight lift cables were replaced.
​
The sidewalks were widened 10 feet allowing more pedestrians and bicycle commuters to use the bridge. The steel channels and floor beams that were added during these operations allow the Hawthorne to accommodate light rail commuters in the future.
The Hawthorne Bridge painting project was finished ahead of schedule. 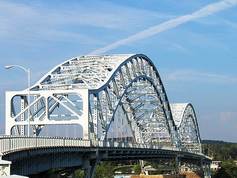 ​The structural steel was abrasive blasted to SSPC-SP 10 using a recyclable steel grit abrasive, within a SSPC Class 1A containment. The coatings used were Carboline Organic Zinc-Rich Epoxy primer, Epoxy Mastic intermediate, and Urethane topcoat. Temperature and humidity control procedures were required on this project during the painting operations. The containment systems were heated to appropriate temperatures during winter months.